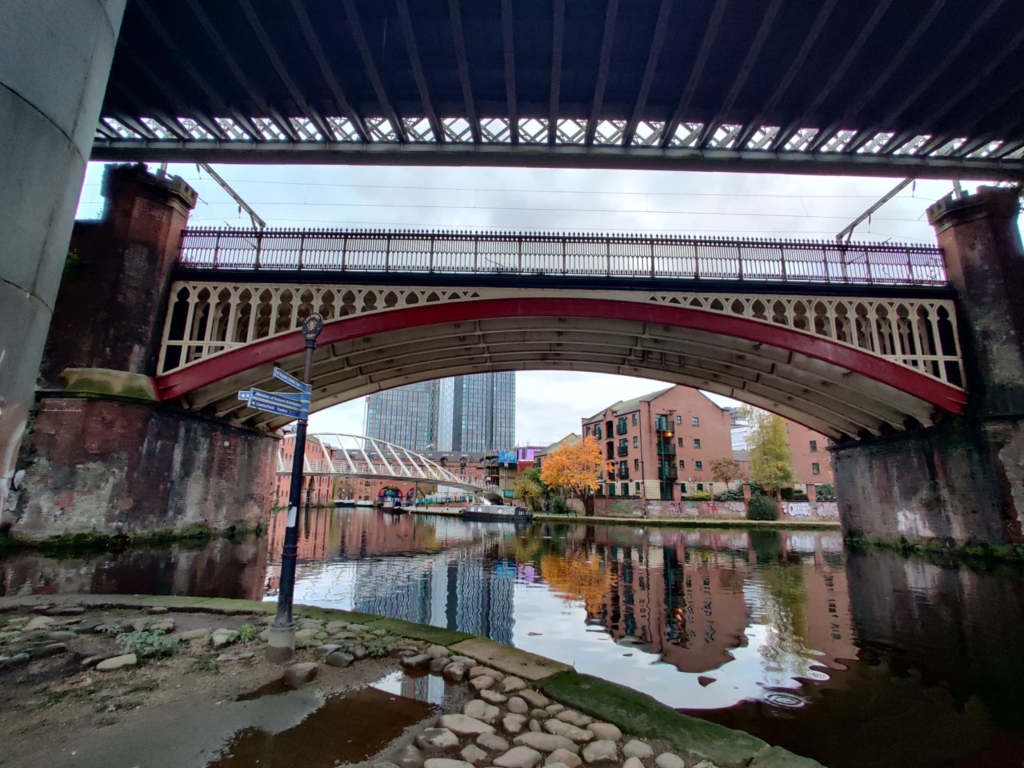 When we talk about cities criss-crossed by canals, Venice, Amsterdam or Bruges immediately come to mind as a winning trio where water meets architecture to the delight of romantics.

But if I tell you that Manchester can take a piece of the pie, I am pretty sure you won’t believe me. And yet, this industrial city in the North of England has more than one trick up its sleeve!

A strategic node at the time of the industrial revolution, it was then one of the most active cities in the transformation of raw materials and, as a result, became very greedy for coal. This is when the young Duke of Bridgewater (the aptly named) intervened, freshly returned from his Grand Tour of Europe during which he discovered the Canal du Midi, completed in 1681 in the south of France. The latter inspired him and he decided to build a canal to link his coal mines to the Irwell River in order to reach Manchester. Completed in 1776, this canal transformed the history of the city as well as that of England.

Not only was coal transported by river twice cheaper for Manchester, but all goods, whether raw materials or manufactured goods, especially the most fragile ones such as pottery, found a buyer using this new means of transport, faster than the roads. The Duke of Bridgewater was an emulator and England embarked on a vast program of canal construction to link the North to the South as well as the main ports. At the beginning of the 19th century, more than 6000 kilometers of canals crisscrossed the United Kingdom.

Manchester was growing and by the 1830s it was considered the largest industrial city in the world. Manufactured machines were made there for the mills that processed the raw cotton coming from the Empire countries and Manchester was even named Cottonopolis. It was then in increasingly open competition with Liverpool, “the” port of the open sea, which overshadowed it and cost it dearly. As the railroads began to make the canals less attractive, a pharaonic canal project linking Manchester to the sea was launched and completed at the end of 1893. The Manchester Ship Canal, 64 km long, made Manchester the third largest port in England.

Between these two “historic” canals, other canals were dug, creating a complex intertwining with the three original rivers: Irwell, Irk and Medlock. In other words, Manchester is full of bridges and tunnels over the water, the latter always being around the corner like a prankster.

Of course, from a historical point of view, one can only retain the industrial character of the whole since it is indeed warehouses and factories that these canals served. Where the hell is the romanticism in all this?

I would say that the utilitarian role of these canals, interspersed with many locks, has made them deeply human and alive. Like good little soldiers, they criss-cross the urban environment, but offer the reflection of clouds shimmering in the water in such a way that the greyness of the north is always compensated by the poetry of the sky. They are bordered by towpaths, which have become pedestrian paths, allowing you to explore the city at a different pace.

Unlike the above-mentioned cities, in Manchester the canals are not imposed but discovered. You have to go and meet them except when they suddenly block your path where you don’t expect them. Sometimes, slightly lower down, these waterways are like a parallel world where barges continue to cross, where lock keepers manipulate the opening of the waterways, where people talk to each other between boats and pedestrians.

And then, the warehouses were converted into offices or residential buildings. Other modern constructions have appeared alongside them.

Bars, bakeries, cafés, stores and discotheques have opened right on the water. Here, one feels more serene, spared from the rest of the world. Some sections of the canals are more popular than others. Some are more residential with flower gardens that spill over the banks. Some are home to geese or ducks. Some can only be guessed at by leaning over a bridge, while others are trendy spots. In fact, there is something for everyone. Another city has developed here. Slower. More relaxed.

Without being omnipresent at first sight, these canals have nevertheless managed to give a particular atmosphere to this city. I wouldn’t call it “totally” romantic but I find it extremely warm because water is a social link here.

In Manchester, the canal is not haughty. It has a soul. It is the inky trail of a working past that the city has admirably converted.