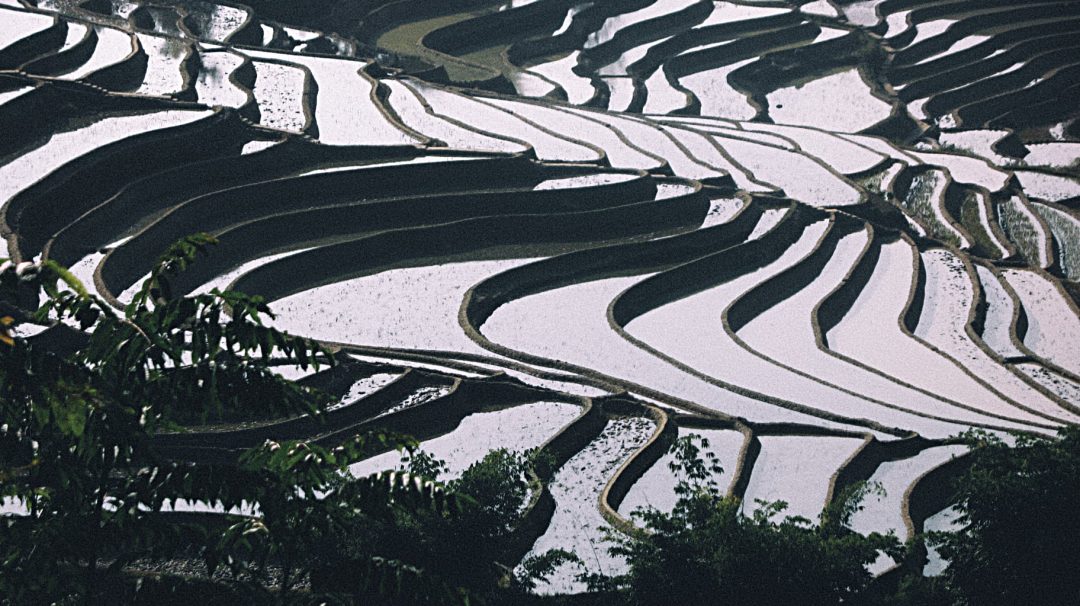 In the southwest of China, in the province of Yunnan which borders Laos and Vietnam, are marvelous living and changing sculptures carved on the mountain slopes built according to a traditional process dating back 1300 years.

Thousands of anonymous individuals work there every day to make this work stand and endure. These are the incredible rice terraces built by the Hani, the “non-Han” people who belong to the so-called “minority” group in China.

These lands have been cultivated to generate food.  The fact of conceiving them as a “landscape” may seem a very Western interpretation, especially since many artists have already taken possession of them.

Yet, who said that art and agriculture could not naturally cohabit? Certainly not the Hani, for whom the symbiosis with the environment is such that their creations have embraced the place with imagination, respect and intelligence to the point of making them works of art. On nearly 16 000 hectares, and on slopes climbing from 800 m to 1800 m of altitude, theserice terraces were built according to an ingenious and united system, of collecting the rainwater runoff from the sacred forests that are located upstream.

Nearly 450 km of collecting canals, made from local materials, bring the water which drips gently according to a process of communicating vessels, allowing each parcel to benefit equally from this indispensable wealth.

When a terrace is too full, the overflow is designed so that the water seeps into the next plot that needs it and so on. Judicious diversions, made of stones placed on secondary channels, allow this remarkable orchestration. Similarly, holes are drilled into the earth to drain the plots and dry out those that need it. Art and engineering are the foundations of this ancestral model that always privileges the community.

And what about the ecosystem we think we are reinventing? The Hani have hierarchized their terraces and rice is not a monoculture. Other complementary crops occupy these spaces and the lower terraces are used as composting sites and nurseries to prepare new plants. In addition, breeding and cultivation have always been associated and the irrigated terraces are home to buffaloes or ducks, as well as fishes to supplement food resources.

The Hani have been practicing the famous concept of permaculture for over a thousand years, adapting perfectly to their environment, studying every possibility to make it work. They have also incorporated aesthetics. This beauty is unvarnished because it comes from a deep respect for the earth and the gods that inhabit it. By building these low walls that wind up the hillside, the Hani are in dialogue with nature, taming it while venerating it because water is the origin of all things. It is therefore a precious resource that must be shared and honored. The mountain, which hosts the terraces and allows this circulation between the plots, is also a strong symbol of solidarity and common life.

As always, one generates the other and vice versa; this “human” landscape of rice fields is a nourishing representation of this universal cycle of the Tao.

The villages are close to the rice fields in order to take advantage of the water sources and the day we were there, while we were following the paths built along the walls of the terraces, we ended up in one of them at the bend of the mountain, interrupting a burial ceremony. It was with extreme gentleness that an old woman took us by the hand and associated us with the funeral rites, sharing food and drink with us while laughing at our distress. I will never forget the sparkling eyes of this person who so naturally included us to her community. The light of the setting sun on the rice fields was reflected in her pupils and she carried in her all the serenity of these immemorial places.

However, recent profound changes that are taking place in these remote rural territories raise questions about the future of this way of life that had resisted so well until now.

It is true that the rice terraces of the Red River Valley are protected by UNESCO, but will the new Hani generations resist the call of modernization? Protection may save the site, but it is to be hoped that it will not be at the expense of the life that takes place there. For the rice terraces are much more than a beautiful postcard. They have a heart that beats and a soul attached to the sacred forces of nature that must be preserved even more than the landscape that is attached to it.

Text and photos from Claudia Gillet-Meyer