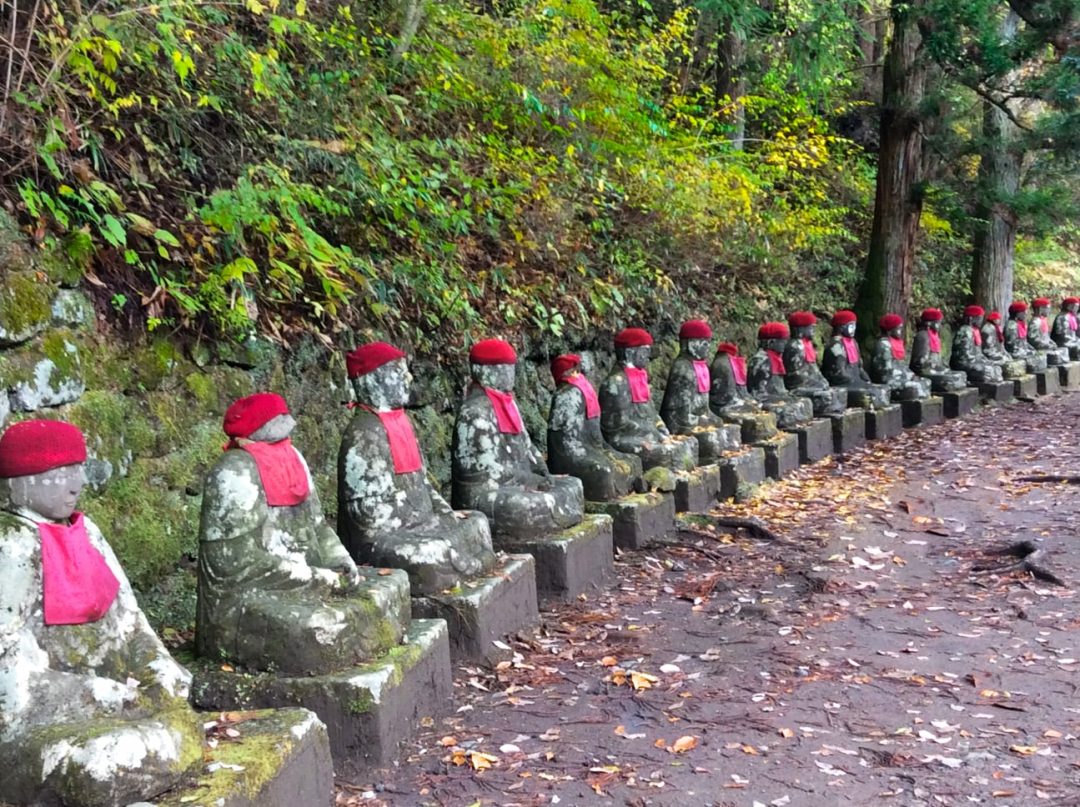 We are all on our way or passing through, children who have grown up, travelers of life or of the vast world. The path we take every day, materially or spiritually, is not always obvious. Sometimes we have doubts, we get lost, we forget our goals or we face bigger obstacles than expected. In such moments, when our journey as human beings becomes more difficult, we would love to meet a guide capable of understanding and assisting us.

In Japan, this guide does exist and is called  Jizo Bosatsu

In the Buddhist religion, he has the status of Bodhisattva, who, like Buddha, has attained enlightenment, but has chosen to renounce entering nirvana to save mankind and bring it to Enlightenment. It is even said that Jizō vowed to enter nirvana only when the underworld had been emptied!

He is therefore the most altruistic, tender and compassionate deity that one can meet. Materialized in the form of a stone statuette representing a small chubby and friendly monk, he is often dressed in a cap and a red bib. It is impossible not to notice him.

As this spiritual guide is responsible for helping people find their way, and he devotes himself especially to the weakest and most destitute. That is why, quite naturally, he became the protector of children whom he assists during their life as well as at their death. In this role, he has a very precise responsibility to help their souls leave limbo in order to pass into the alter world.

Fortunately, he also protects children in their daily life for all their small evils and sorrows. If the clothes for the statuettes are of red color it is because this one is associated with Purity, thus childhood, and has also the power to chase away demons.

Furthermore, he has the role of “assistance to a person in danger” making Jizo the protector of travelers who may get lost, have bad encounters or worse, be attacked. He is there to watch over them and the chance encounter of meeting him on the road, in the most unexpected places, but especially at a crossroads, is always reassuring. He also guides people between the real and spiritual worlds and is positioned at the entrance to temples.

Finally, Jizo is the guardian of the deceased whose graves have been neglected by their families. In order for these lost souls to reach paradise, the Jizos are then placed in groups to symbolize the prayers and support of loved ones, escorting them on their journey to the afterlife.

This Bodhisattva is a major deity in Japan. Firstly, because he is friendly, peaceful and accessible to everyone, secondly because his mission prevents people from feeling abandoned and finally because he symbolizes transformation and happy rebirth.

When we meet for the first time these small stone men, we are a little bit puzzled, even disturbed by their red baby clothes. They are like strange figures difficult to integrate in our western culture. Then, when we know their role, we say to ourselves that finally, we would like to snuggle with these friendly Jizos so that they guide us too, travelers of another country, in transit between two worlds, eternal children on the road of the life.