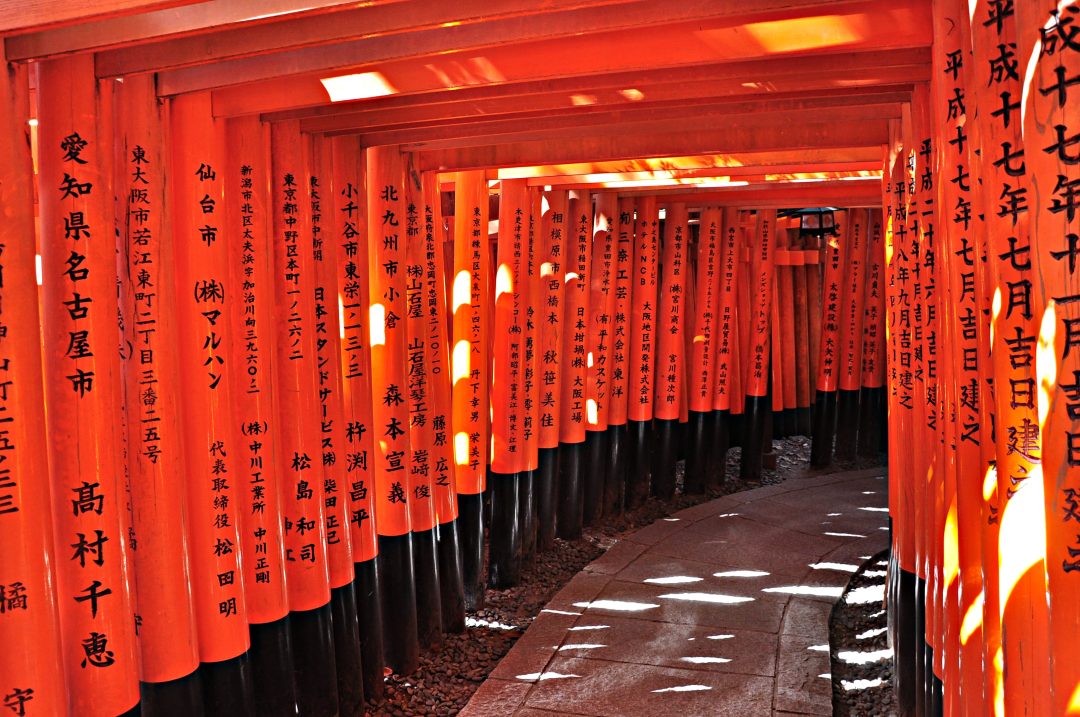 Nesting is, according to me, one of the most fascinating forms of thinking; it allows to appear that which we do not see, hiding itself within another treasure and this, as many times as the form allows.

In short, it is the magic law of Russian dolls.

Nowadays, Matryoshka dolls are closely linked to Russian folklore and, in fact, it was the Russian painter Sergei Maliutin who popularized them at the end of the 19th century when the country was searching for its identity. What is forgotten is that, from the back of a toy store in Serguiev Possad, north-east of Moscow, he drew the first sketches of the famous Matryoshkas.  They were inspired by wooden dolls representing the seven deities of happiness or good fortune that he had brought back from… Japan! It is thus the country of the rising sun which drove him to use this magic law of the interlocking.

With this principle of Russian dolls in mind (since such is the name now), I invite you to visit the Fushimi Inari temple in Kyoto in order to understand who hides what and vice versa. Let me explain.

Upon arrival, we discover a sanctuary dedicated to Inari, which is a kami or “spirit” in Japanese Shintoism, associated with prosperity and good fortune. Then, we learn that the notion of prosperity having evolved over time, the kami has also changed appearance and he can be male, female or androgynous depending on the period concerned. Moreover, this one – the kami – needs a messenger or yokai to protect him. In the case of Inari, it is Kitsune the fox who plays this role. However, being a fantastic creature, Kitsune is also changeable and mischievous with beneficial or malevolent powers. To honor them – the kami as well as the yokai – one can bring offerings or erect a torii (or wooden portico).

Is it clear? Well, for the initiated maybe, but for me it was a bit confusing and I had to open box after box to understand the extraordinary story of this temple.

The first thing that captures ones senses and makes this sanctuary special is its immensity, its structure and its beauty. As “good fortune” is a value quite commonly demanded from the god who embodies it, the gifts of torii have accumulated over time and it is a great vermilion spine articulating itself on the mountain that welcomes visitors as soon as they enter the entrance gate.

Founded during the Nara era (708-715), Fushimi Inari developed more particularly from the Edo era (1600-1868), during which the donations of torii began, to the point that there are now nearly 10,000 of them. Their red-orange color comes from Chinese Taoism and this snake of red porticoes which contrast the green of the surrounding forest is undeniably the greatest visual attraction of the place. One can see, by the inscriptions made in black on each portico, the names of the patrons who are often very rich people or commercial companies.

Let’s talk now about the god or kami Inari to whom it is dedicated. He is one of the most venerated in Japan. He appears first of all as the god of good harvests, of rice in particular but also of tea. But the concept of production of wealth being evolutive, he became, during the Edo era, the god of wood and textile craftsmen and especially of blacksmiths who made the samurais’ swords. And then, as the professions that make people prosperous continued to change, Inari was naturally transformed into the god of trade, industry, prosperity, luck and success.

As Japan became a global economic power, the rise of Japanese economic interests meant that Inari (and its shrines and priests) became important to the opening of new businesses, buildings and corporations in general.

Then Buddhism took over the ancient kami and Inari was associated with Dakiniten or even Benzaiten, a Japanese version of the Indian Saraswati, which is one of the seven deities of happiness. The famous deities of our starting dolls!

Are you still following? Because, be careful, we are not yet at the end of the interlocking.

The most extraordinary is that the kami uses a yokai to serve and protect him. Inari‘s is Kitsune, the fox! Generally considered as a cunning and malicious female spirit, it can help or harm humans around it. However, since Inari is a benevolent deity, only the helpful Kitsune are her true servants.

Now, if you thought you had more or less understood Inari and his messenger, I challenge you to outsmart all the tricks this fox has to offer. Because Kitsune has influenced Inari‘s appearance. Thus, when the pagan cult of the goddess Kitsune met the cult of the image of the old man (of the crops), Inari was granted her powers as a polymorph…

Kitsune is an emblematic figure of Japanese folklore precisely because of its metamorphoses. This fox loves playing tricks on humans. Endowed with a great intelligence, she has many powers and every hundred years, she grows a new tail. It can have up to nine tails, a sign of advanced wisdom. At a mature age, Kitsune becomes extremely powerful and can take on any appearance. It has the power to read minds, to take possession of spirits and dreams. Thus, the fantastic creature can manipulate humans and influence their destinies. However, it turns out that the notion of right and wrong for Kitsune is a matter of what this fox thinks is right or wrong, and its behavior varies depending on how it has been treated. In addition, this animal is quite emotional and is easily carried away by her feelings. It can be resentful and touchy, but will keep her promises if its trust is earned.

As it is not advisable to offend this fox, the inhabitants gradually confused the kami with her messenger and Kitsune is now confused with Inari and directly worshipped as the god of rice, trade, prosperity, success, etc. which is obvious when you walk in Fushimi Inari temple. The fox statues are omnipresent, holding in their mouths sometimes the key of the granary, sometimes an ear of rice or a ball symbolizing the spirit of food.

Thousands of wooden plates with the effigy of the fox collect the wishes of the visitors who make in exchange offerings of rice, sake, money or fried tofu. In short, one must behave well with Kitsune!

Inari and his link with Kitsune are so popular in Japan that they are regularly featured in various media. From Kabuki theater, they have appeared in series (Persona), role playing games (World of Darkness) or mangas (Naruto) to name a few. And of course, they are worshipped before the harvest period and all the shrines dedicated to Inari organize celebrations where the participants wear Kitsune masks.

There are 2970 places of worship dedicated to Inari in the Japanese archipelago but the Fushimi Inari Shrine in Kyoto is by far the most popular and the most spectacular.

If you have followed everything well, you will now know that entering the Fushimi Inari shrine is first of all to pass from one torii to another with humility, without disturbing the Inari kami, while knowing that Kitsune, the cunning fox, can hide behind each column, that we must get its good graces and make gifts in case it gets angry and, consequently, takes away our luck or prosperity.

You will then make a journey to the heart of Japanese enchantment, provided by this incredible law of nesting that resembles dolls dedicated to good fortune!

Text from Claudia Gillet-MEYER and photos from Régis Meyer