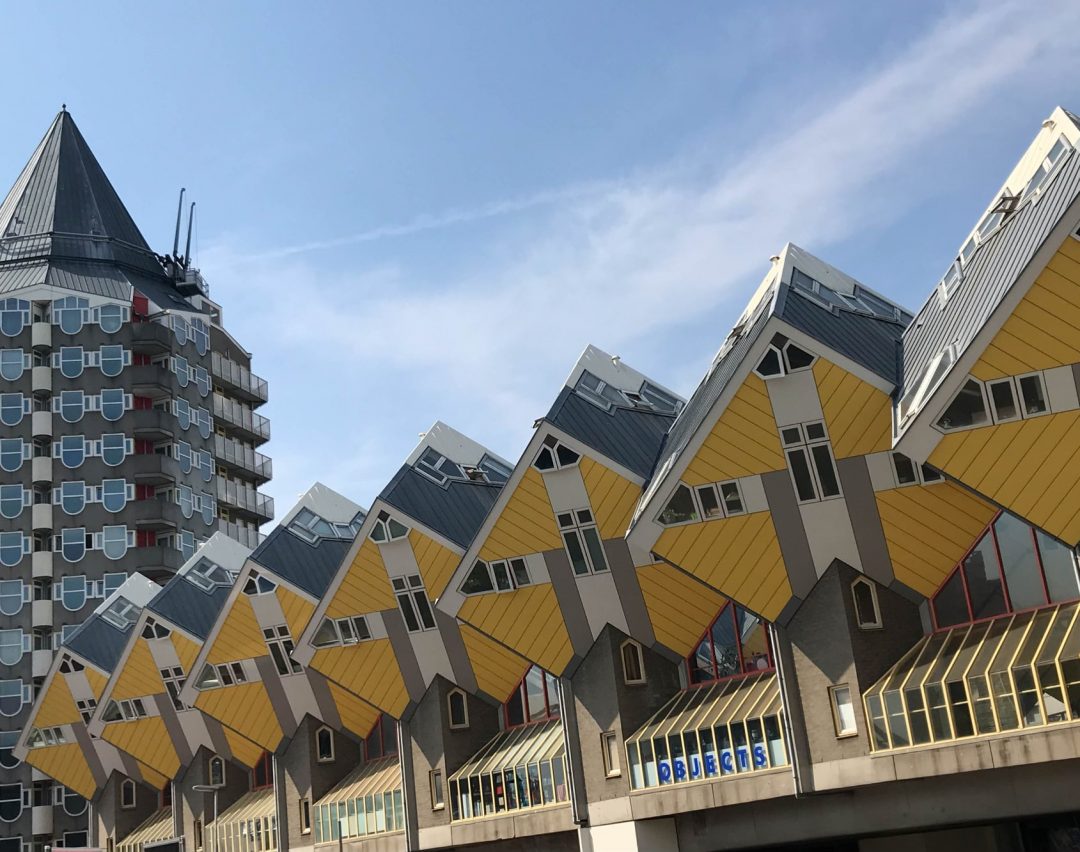 There is nothing more sinister than a city being bombed, but that is unfortunately what happened to Rotterdam during the Second World War. In order to confront the rebuilding of a devastated city, its councilors made a radical choice : the city would not be restored identically.

Bounce, invent, imagine, were the directives, rather than cry, regret or despair. Boldness and creativity were encouraged in order to erect the city’s future buildings, allowing Rotterdam to become a true architectural laboratory which still continues to be the case today, constantly bringing innovations to both its buildings and its urban fabric.

In the emblematic and central district of “Oude Haven” Blom imagined, in his words, “housing like an urban roof”. These are modules of perched quadrilateral houses, all identical, which together look like an adult LEGO game. Their large cubic heads with eyes on the sides that condescendingly bow in the air seem as if they are about to come to life. Depending on the angle of view, they look like a gossip concoction, a surreal forest or a kaleidoscope.

When you walk in the public space, under the huge pylons that support them, you would even expect to see little men from another planet, descending from their spaceship by the unique staircase that each dwelling has. Yet there are real people who have lived and still live here, in units of about 100 m2 each, custom-built to integrate this slope.

Between science fiction and children’s storytelling, it looks like a crowd of friendly giants who have fun watching the passers-by wandering around. Blom’s thumb of the nose at the law of gravity, conservatism and mass housing makes this complex still one of the most attractive places in the city.

Piet Blom was considered a singular architect, obstinate and uncompromising in his choices and commitments. He became a key figure in the structuralist movement and, with the incredible effrontery of his cubic houses, he opened the way for all possibilities in the Rotterdam cityscape.