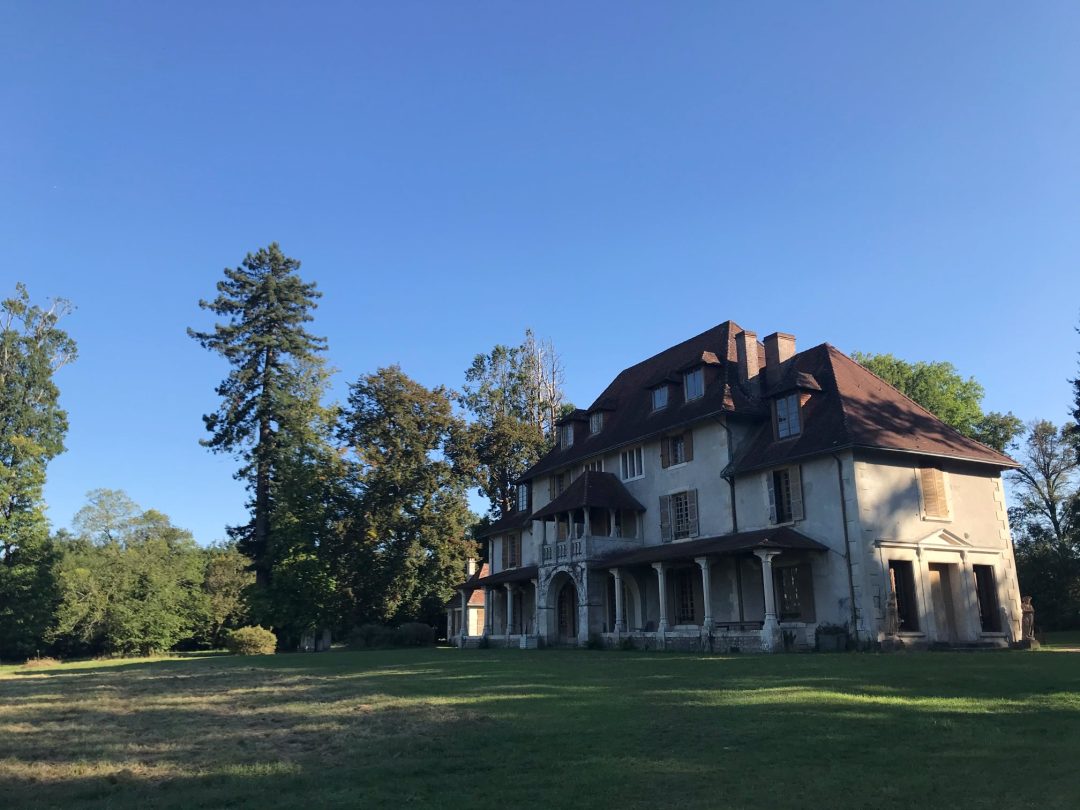 The house had fallen asleep, rolled up on itself like a cat, so as not to die. It had decided that it would survive time, if it remained thus slumbering, without anyone noticing. It had played it safe, in a way, so that no one would come to plunder, dismantle or destroy it.

It was a large bourgeois vacation home between Poitiers and Niort. It was intended for a large family who lived in the city and came to use it regularly in order to enjoy the country air, its privileged location on the edge of a wood and the freedom of the great outdoors. As such, it had been furnished with care and elegance but without ostentation, so that children and parents could feel at ease, but with all the modern comforts of the time.

That time period dates back to the beginning of the XX° century. Then, there were employees, who had their separate “quarters”, a large dining room with woodwork designed by the grandmother – who was a bit of an architect – a living room where people talked, played trictrac or piano and a billiard room for the men.

There were plenty of rooms with their own bathrooms, and for the children it was important to separate the girls from the boys. The floors were made of parquet or cement tiles with geometric patterns and the walls were covered with pretty flowery wallpapers.

There was a key for each room, with a numbered key ring, which was placed in a cupboard on the first floor. Even the cupboards had their numbered keys, because that was how it was done then.

Linen was neatly stored there, as were dishes in the pantry, books in the library and souvenirs in the attic. Upstairs, under the roof, the grandmother would do her framing and the children would come and put their toys away.

The house welcomed “it” family for the vacations and  felt privileged.  It knew that it was a heaven of peace, of calmness, of carefree moments, of reunions and shared pleasures. It let itself be lulled by the hours that passed and that gave rhythm to the life of the inhabitants: noise of the cutlery around the big table, laughter and conversations, yells of the children who ran in the corridors.

All this lasted a long time and nobody in the family thought of changing the house. They liked it like this and it passed through time with all its charms until the day when no one came anymore. Until the day it was finally put up for sale.

That’s when the house decided to step in and not let itself be taken over. It was still intact and intended to stay that way.

The circumstances of life proved it was right. When the new owners visited, they were shocked. A few cobwebs and a little dust had settled on the place, but the heart of the house was still beating to the rhythm of its more than 120 years.

It was so alive and preserved that they couldn’t imagine anything else but leaving it as it was, and tiptoeing away, whispering. And they did this incredible thing; they bought it so as not to change it and … even more unbelievable … one of the descendants of the family joined them in this purchase.

For, in their minds, a project had to be built and it quickly took shape. This house was to pass on the immense treasure it contained; a formidable testimony to the daily life of a French bourgeois family throughout the 20th century. They decided to combine the farm and the property in a cooperative form and to include shareholders capable of being touched by this somewhat crazy project.

Since then, every day, the house regains a little of its luster, its history and its memories. One cleans it with great respect, one discovers registers, plans, documents that reveal its former life, one tidies up again the sheets and the dishes that were waiting for it, one puts flowers in the vases. It – the house – yawns, sighs, stretches and purrs like the big cat that wakes up slowly, throwing a cautious paw towards the outside. How right it was to put on the big face and wait!

Especially since there is no question of turning it into a rigid museum, but only of giving it the opportunity to reveal a few secrets. Opening this house with everything that has always belonged to it – sofas, game table, tennis rackets, chandeliers and spoons included – is like passing through the looking glass, being a guest of the family members, going back in time and feeling the unique experience of a daily life that we don’t learn in history books.

It was yesterday, so close and yet so far away.